This category is specifically for footage and information "from the air".

September 2016: We are busy looking at various options for Drones. At the moment we have narrowed the choice down to the DJI Phantom 4 and the Hex H20 fully waterproof model. More posts to follow once we have decided.

Update 17 Oct 2016: We have just received our DJI Phantom 4 and it is fantastic! Test flown yesterday for the first time and we can immediately see that it will be great for capturing images and videos that we would not normally be able to get.

One day after the Phantom 4 was ordered and paid for, DJI announced the Mavic Pro Drone. We are going to buy one of them as soon as they are available and will then be able to use both on LADY ROSLYN, as well as on our travels, so that we can create side-by-side comparisons to post here.

Update 25 Jan 2017: DJI have outdone themselves by launching the Phantom 4 Pro in November 2016 with forward, rear and side sensors as well as a huge upgrade to 20mp still and 4k 1" sensor video camera. In addition they have upgraded to a high capacity battery with longer flight time. We have now sold our

Phantom 4, bought the Phantom 4 Pro and have been absolutely blown away by how good this drone is. As of today we have just received the Mavic Pro but not yet flown it and will now begin side by side comparisons of the two to see which will be better for use on board LADY ROSLYN. We have an idea which will one will be our "go-to" drone but time and testing will tell.....

Update 15 February 2019: We sold the Mavic Pro and have just bought the new Mavic Pro 2 with Hasselblad 20mp 1" sensor camera. Last season, as can be seen in the blog post below, we used the P4 pro extensively and it has been our absolute go-to drone for shooting images and video while underway. We will be testing the Mavic Pro 2 this coming season in higher winds and be attempting some hand catches and launches while wearing thin gloves as well as a protective jacket to prevent injury from the propellers.

This video was shot in late October 2019. Until we can return to Lady Roslyn, we can only re-live our adventures through our stored images.

The Phantom has landed - lessons our drones have taught me 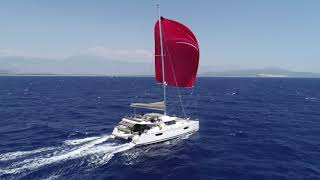 Our crew claim that the wind gods were smiling on us yesterday after we had done such a good Trash Tuesday clean up. Absolutely...
1
2345
bottom of page